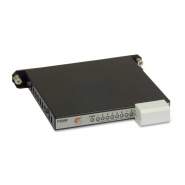 MTL Instruments has released an FDT/DTM interface and driver for its F809F Fieldbus Diagnostic Module. FDT/DTM technology is used by major manufacturers to describe the information that is accessible in digital devices supporting a wide range of communication protocols. The technology is used by major process control systems and maintenance tool suppliers to support device diagnostics and calibration, with several control systems now supporting DTM’s for FOUNDATION™ fieldbus devices.
The F809F Fieldbus Diagnostic Module from MTL has established a large installed base with users liking the easy integration into fieldbus control systems over FOUNDATION™ fieldbus H1. However, the F809F is one of the most sophisticated fieldbus devices, with over 2000 parameters, stretching the standard user interface based on the device description to its limits.
Support of FDT/DTM technology by the on-line diagnostic module and the fieldbus control system make it much easier to make use of the large amount of data gathered. The F809F DTM provides a simple display of the status of each fieldbus segment, a more detailed view of the parameters together with any alerts for the instrument technician and an advanced user view with configuration options.
Following feedback from end users, the F809F DTM is designed to comply with NAMUR NE107 Self-Monitoring and Diagnosis of Field Devices specification. The NAMUR specification provides four categories for diagnostic alerts from field devices:

MTL’s F809F DTM interface displays the appropriate NAMUR NE107 symbol to summarise the status of each fieldbus device, segment and system in the tree view, as well as providing a status summary of each view to indicate any active alarms. To simplify the user interface, only devices that have been connected to a fieldbus segment are included in the segment tree. Additionally, a radar graph overview for each segment shows the current values, alert and pre alert limits using the Namur NE107 specification colour scheme.
The F809F DTM provides a comparison of the current values with a baseline data set, usually saved soon after start up. Further, a commissioning report can be printed showing the parameter values and the overall status of the segment.
The user interface of the F809F DTM has been developed with input and extensive testing by experienced fieldbus users and may be downloaded from free of charge.