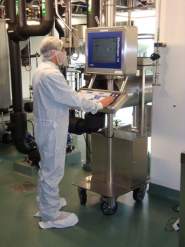 Emerson Process Management’s plant-wide wireless network is helping to improve maintenance and operator efficiency, and increase plant flexibility within the Novartis biotech production centre at Huningue, in the north east of France. Emerson’s DeltaV™ digital automation system with a fully integrated Wi-Fi® network and mobile operator stations are providing process and plant information to operators and maintenance staff throughout the facility. The new wireless network is also improving the flexibility of the control system when there is a need to adjust a product recipe.

Novartis, one of the largest and most widely respected pharmaceutical companies in the world, employs over 300 people at Huningue where they produce the active ingredient for Xolair®, a drug used to treat moderate to severe persistent asthma, as well as several monoclonal antibodies and an immunosuppressant. Xolair is derived from genetically modified mammalian cells that are cultivated in a laboratory before being fermented in various bioreactors.

Localised control is essential to the efficient management of the process which is spread over three production levels, as well as being geographically dispersed. Novartis implemented a distributed architecture, based on Emerson’s DeltaV system. This has enabled operator stations to be located near the main areas of the process such as the bioreactors and tanks. To further maximise operator efficiency, Novartis recognised that they needed a control architecture that enabled their operators to be fully mobile.

Novartis is a pioneer in implementing new technology and has been using wireless since the year 2000. In 2008, when migrating to version 9 of Emerson’s DeltaV system, the company benefited from developments including integrated Wi-Fi and wireless security. In 2009, Novartis expanded the wireless architecture with additional Wi-Fi access points, implementing a complete mobile wireless solution with the DeltaV system.

“In 2000 we introduced wireless technology and recognised that it was well suited to our needs. The most recent developments to Emerson’s DeltaV system have enabled us to implement a plant wide wireless solution,” said Philippe Heitz, Head of Engineering, Novartis.

Novartis has installed a wireless network with coverage obtained on all three production levels using 10 Wi-Fi access points. The network includes 17 mobile operator stations and 100 DeltaV controllers, spread over two systems. The first system controls the upstream process of cell cultivation and harvesting. The second controls the downstream phase of purification and freezing. Both systems will soon be interconnected using Emerson’s DeltaV ZONE, a software and hardware solution for connecting two systems.

The Gecma Challenger mobile operator stations provide Novartis with complete flexibility to control its manufacturing processes. To meet the standards required for sterile zones C & D, the mobile operator stations have a stainless steel enclosure that houses the central processing unit (CPU). The devices are equipped with a USB connection to the usual keyboard, monitor and trackball for this type of environment and connect to the network of Wi-Fi access points.

Operators can move from one level to another with their mobile station and still maintain an overview of the process. This has not only significantly improved operator efficiency but it has also made it possible to reduce the number of workstations required by 50%. There have also been efficiency improvements in the area of plant maintenance. For example, by using a mobile workstation, it is now possible for just one person to calibrate the instruments when previously it would have required two. Should any workstation have a fault there is no longer a need to shut down a process whilst the station is fixed or replaced. The flexibility offered by the wireless network and mobile workstations provides a perfect back-up system. A further benefit is that when a new product is being launched or a recipe changed, the mobile stations can be moved throughout the plant as required, removing the need to install new operator stations.

“Because of the wireless network, we do not need to systematically invest in new control stations, even if the production of new products requires a change to the plant equipment or layout,” explained Heitz.

The benefits of the DeltaV system coupled with the wireless architecture has helped Novartis to diversify production, changing from a single-chain product, such as Xolair, to being able to produce multi-chain products such as monoclonal antibodies and immunosuppressives. This is helping Novartis meet the needs of patients.